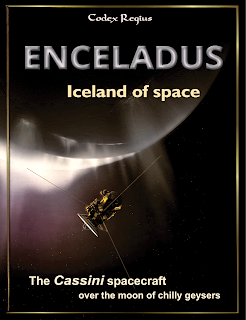 Among the moons of the ringed planet, Saturn, little Enceladus was the primary target of the Cassini space probe other than huge Titan. And for good reason: Apart from Jupiter’s moon Europa, Enceladus is these days considered the most promising target in the quest for extraterrestrial life in the solar system. In this respect, the moons and dwarf planets of the outer solar system have left long-favoured planet Mars behind by now.
Only the last ten years have made evident to us that cold worlds need not be frozen to the core and inanimate. Traces of past or even present activities like earthquakes, geysers, eruptions, snowfalls or even tidal surges can be found on locations from the innermost dwarf planet Ceres to its big brother Pluto far away behind the orbits of the large Jovian giants.
NASA has made it a habit to claim ‘oceans’ in the netherworlds of icy bodies in and beyond the planetoid belt wherever it looks. It may sound encouraging at press conferences because it makes many an audience think of fish, jellyfish and coral. On Enceladus, alleged ‘geysers’ even spray water vapour into the sky, evoking mental images of the Yellowstone National Park, of Iceland or just of Andernach in Germany. Textbook articles, on the other hand, often refer more reservedly to those briny waters inside lesser worlds of the solar system as ‘liquid mantles’.
Both approaches are justifiable, depending on whether you prefer to think in terms associated with water, like a biologist does, or rather like a physicist or volcanologist who prefers to emphasise the analogy of dynamic processes developing on Earth and elsewhere.
We use the latter approach in this book. That way, dynamic phenomena on Enceladus can be described more succinctly, elaborating on the similarities with planets like Earth. For like our homeworld, this minor body is divided into a solid shell, a liquid mantle and, again, a solid core. The geysers, as we will see, closest resemble fissure vents of Iceland hurling molten lava up in long curtains of fire. It seems justified to call Enceladus the Iceland of Space: an Iceland of ice, water and vapour.
Ice plays the role of basalt there, water assumes the role of magma. Volcanologists like to use terms such as cryovolcanism, cryomagma and cryolava to emphasise the differences in chemistry, while the physics stay the same.
Given all the media attention Enceladus has received as the Cassini-Huygens spacecraft crisscrossed Saturn’s system from 2005 to 2017, we find it surprising that no book publisher has so far taken on this fascinatingly exotic world that looks like the backdrop of an imaginative sci-fi film.
In view of the continuing success of our previous books on lesser worlds of the solar system: ‘Pluto & Charon’, ‘Titan - Pluto’s big brother’ and ‘Ceres - Pluto’s little sister’, we have therefore decided to close this gap in the German- and English-speaking markets. Readers who would like to penetrate deeper into the subject are encouraged to read forthcoming ‘Enceladus and the Icy Moons of Saturn’ (ISBN: 0816537070) scheduled to be published in the USA in June 2018 and aiming at the professional audience. Regarding our own series we would like to draw special attention to the ‘Titan’ volume, because it deals with elements of the Cassini-Huygens mission alluded to but not specified in this book.